The voice of reason for the past 10 years in the United States Senate has died.
He will be remembered for a long time.
Bob Byrd used to piss me off big time and his past, to say the least, is checkered.
Ultimately, he became one of the true liberals voices of reason in the senate. He raised his voice and opposed almost all the ridiculous aspects of the Bush doctrine that we are now paying heavily for. He was not afraid to speak out against both wars and the "patriot" act. He recently told WVians to grow up and get away from their coal mentality (my words but his intent).
He apologized for the rest of his life for his opposition to the civil rights act of 1968. Many politicians expressed regret for their opposition but few apologized and recanted their position like RCB did. His regrets for his past racist behaviors were true and honest.
I eventually learned to love the guy.
Take a moment and applaud the life of someone who always did what they thought was best, was willing to admit mistakes and humbly ask forgiveness and served his nation for his entire life.

WASHINGTON — Several open-government advocacy groups said Tuesday that they support a deal crafted by the Democratic leadership of the House of Representatives that would exempt the National Rifle Association and other groups from some provisions of a proposed campaign finance disclosure bill.

WTF?! Democrats in congress are the biggest bunch of pussies I have ever seen in my 50+ yrs of watching politics. They cave to these right wing fuck wads time after time, yet when the right wing fuck wads are in office they roll over the dems like the pussy dip shits that they are. So the dems are a bunch of pussies and the repubs are a bunch of fuck wads. What a surprise.
Posted by SagaciousHillbilly at 10:23 PM 3 comments: 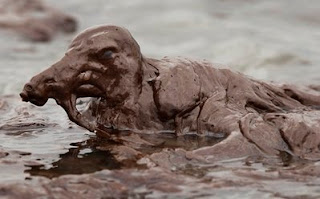 This is a picture* of a sea bird completely engulfed by the oil sludge that has engulfed the Gulf Coast. There are millions of sea birds including pelicans, gulls, terns, cormorants and many other species that will become victims of this horrendous tragedy. Can you imagine seeing one of these birds helplessly trying to flap it's wings to get away from this horror? Can you imagine witnessing its end as it finally gives up and suffocates in a thick coating of crude petroleum emulsion?
How would it make you feel to be witness to thousands and thousands of birds in these circumstances along some once beautiful secluded coastal area.
How would you feel if you witnessed a mother manatee trying desperately to free her calf from a similar oily emulsion only to watch it die a horrible miserable death?
How does it make you feel when you consider that this was a tragedy that could have and should have been prevented?

*Thanks to the Associated Press for not prosecuting me for ripping off their picture. . .
Posted by SagaciousHillbilly at 12:31 PM 3 comments:

When are we going to get tired of this shit? After something like 11 miners died at the Sago mine in WV it was noted that the mining company had been cited numerous times for safety violation pertaining to methane gas which is what blew the place sky high. Ditto the same basic senario at the Massey mine where 27(?) miners were killed a couple months ago.
Now the once beautiful Gulf of Mexico is in the process of being ruined. . . no, really, it is being contaminated to a degree that is unimaginable. This will affect us all.
It is time for the feds to get tough, but they're only going to do it if we the voters demand it. DEMAND that your elected legislators enact legislation that will SHUT DOWN operations that have any history of violation. Shut them down for corrective action AND shut them down as a punitive action. These corporate fucks need to be shown that they are no longer in charge. WE THE PEOPLE CAN demand that our elected political bottom feeders do what WE say, not the corporations that are throwing them endless crumbs.
Corporation DO NOT have protection under the Constitution of the United States. Only WE THE PEOPLE are entitled to constitutional p[rotection in America. Let's make sure that our legislators and judges understand that. For too long the corporations of America (and elsewhere) have been given constitutional protection by the gov't. They actually take precedence over American citizens at times in our courts and our legislatures. Time to demand change.
Posted by SagaciousHillbilly at 4:19 PM 1 comment:

Wednesday, August 8, 2007
Kids, Eyes and Video Tapes
I just read an article about people who have been sitting their infant children in front of DVDs that supposedly teach them language skills. The sad thing is, that a study done by the University of Washington and the Seattle Children’s Hospital Research Institute lead by one Professor Frederick Zimmerman claims that “For every hour a day spent watching baby DVDs and videos, infants between 8 and 16 months old understood an average of six to eight fewer words than infants who didn't watch them.”

Well aint that some surprise to this poor dumb hillbilly. Gee, you mean if I DON’T interact with my children but instead plant them in front of a video screen they will learn less than if I DID interact with them? Folks, sometimes I wonder about WTF these highly educated young parents of today’s society think is really important. I’d bet that many of these parents who have sloughed off their parental responsibilities to some stranger in some unknown locale who authored some mindless DVD are the same ones we see cruising down the interstate highways with their children in the back seat watching movies on a video screen that pops down from the ceiling. WTF?! Don’t you want your kids to observe and be aware of the world around them? Don’t you want your children to understand what is going on in the world and be situationally aware of their environment? What is the matter with you people? Is it really so difficult for you to deal with your children that you need to shut them away in front of a video screen so that they will sit transfixed for hours at a time while you do whatever mundane unimportant shit that you occupy your time with? Why did you have those little darlings to begin with? Just to say you could? I’ve got news for you moron; I can show you plenty of ignorant hillbillies with not even a high school education who have populated the world with likewise ignorant little hillbillies. You having kids is no accomplishment to hang your hat on. Check back with me in 20 yrs and we’ll talk about you child rearing “accomplishments.”

That leads me to another different but related topic. . . think long and hard young parent about what you are doing today. The same goes for you young non-parents. When you hit mid to late middle age there will come a point in time where you will suddenly get all wide eyed and say “what the fuck was I thinking? Why the fuck did I decide to do that?!” Yea, you will. It doesn’t matter what you do today, it doesn’t matter if you listen to every word I say and try your hardest to avoid it, you WILL eventually say that, it’s just a matter of how traumatically it effects you.

Here are a few things you might want to consider:
Pursue your passions. Nothing else really matters in life. Don’t settle for some dead end job that you tolerate because it pays well. Dig deep inside and figure out what and who you want to be and then BE IT.
Decide what’s important in life for you. If having kids is it, then go for it. Do it with passion. Do it with all the intellectual ability you can muster. Make it the most important thing in your life. Grow your common sense around them. If something else is more important to you, then don’t bother with the kids. There are enough slack jawed morons running around in the world today. No sense in you contributing to the pool.
Now, did I say that if you have kids you can’t do anything else? NO! You can do lots of things and pursue lots of passions, but the kids need to be the #1 top drawer item on your agenda and YOUR actions need to reflect that commitment. . . or, you can just travel along through life grasping at whatever bullshit the corporate marketing bottom feeders (yea, that puts you on the bottom below them) shove down your throat hoping that it all solves your problems, makes your children smarter and you more beautiful. G’luck with that.

Ok, back to the kids in front of the video screen. . .
Posted by SagaciousHillbilly at 4:14 PM No comments: