OK, so they have a bunch of surveillance cameras show this guy pulling out his gun and shooting all these people. There are dozens of eye witnesses.
Despite that, they are saying it will take years to try this case.

I believe in a fair trial for everyone no matter what their alleged crime, but come on, "years?!" Our system is broke. I'm not sure why it would take so long, but taking years to try a guy of a crime that there is video tape of him committing is ridiculous no matter what the crime.

I hope some judge steps in and stops this bullshit circus and gets this guy the justice that he deserves under the Constitution of the United States and the justice that the victims deserve.

AP – This Saturday, Jan. 8, 2011 photo released by the Pima County Sheriff's Office shows shooting suspect …
Slideshow:Ariz. Shooting Tragedy
Play VideoVideo:Rep. Gabrielle Giffords' Complications ABC News
Play VideoVideo:Congresswoman Gabrielle Giffords Heads to Houston ABC News
By JACQUES BILLEAUD, Associated Press – 29 mins ago
TUCSON, Ariz. – The man accused of carrying out a mass shooting in Tucson pleaded not guilty Monday to charges he tried to kill Rep. Gabrielle Giffords and two of her aides.
The plea by Jared Lee Loughner marked his second court appearance since he allegedly shot the congresswoman and 18 others at Giffords' meet-and-greet event on Jan. 8 outside a grocery store in Tucson. Six people died, including U.S. District Judge John Roll and a 9-year-old girl. Thirteen others were wounded.
Posted by SagaciousHillbilly at 3:56 PM 3 comments:

Be afraid, be very afraid of who's running the house. . .

House leader Cantor believes Obama is a US citizen

WASHINGTON – The new Republican House majority leader says he doesn't think questions about President Barack Obama's citizenship should play a role in the discussion of policy matters.
Two years into the Obama administration, so-called birthers continue to argue that Obama isn't a natural-born citizen and that he hasn't proved he's constitutionally qualified to be president. Birth records in Hawaii haven't dissuaded them.
House Majority Leader Eric Cantor says he believes Obama is a citizen and that most Americans are beyond that question.

Wow, this right wing nut case has really gone moderate. Look out, you'll lose your base.

This guy is totally against individual rights unless it has to do with gun posession. He hates the natural environment, he doesn't support the American worker, votes for anything that any corporation wants, votes against civil rights EVERY time but for anything having to do with "homeland security," votes against educational funding EVERY time, is totally against health care for American working people. . . if it's right wing, he votes for it.

This is the kind of leadership the republicans are providing us in their house majority.
Posted by SagaciousHillbilly at 8:20 PM No comments: 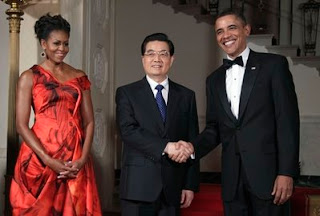 We have to make peace in the world. If we put half the effort into making peace that we do toward making war, it would be a much more peaceful planet.

Another whacked out right wing fundamentalist christian. WTF is the matter with people in Alabama that they would elect a moronic bozo like this?

Hello Alabama, you are a bunch of ignorant backwoods douche bags.

Hard to believe that one of the greatest technological achievements ever accomplished came out of Alabama.

How could anyone in these United States make a statement like that let alone a governor of one of our states?

I hope we hear a loud and clear voice of opposition from the citizens of Alabama over these recreant comments.

BIRMINGHAM, Ala. -- Alabama Gov. Robert Bentley told a church crowd just moments into his new administration that those who have not accepted Jesus as their savior are not his brothers and sisters, shocking some critics who questioned Tuesday whether he can be fair to non-Christians.

"Anybody here today who has not accepted Jesus Christ as their savior, I'm telling you, you're not my brother and you're not my sister, and I want to be your brother," Bentley said Monday, his inauguration day, according to The Birmingham News.
Posted by SagaciousHillbilly at 7:03 AM No comments:

Politicians should look at the blood on their hands. . . but they won't.

Watching the politicians on the cable news channels is an exersize in disgust. Thy are posturing and voicing their sadness with their droopy eyes and all their bullshit but not one has talked about the fact that this nut case was instigated to do what he did by the angry and nasty political rhetoric that has been getting worse and worse over the past decade.

Let's call it like it is. . . the right uses violent and condemning rhetoric to polarize, scare and generally intimidate the voters. The left lets them get away with it instead of standing up to them and pointing out their recreant behavior by taking the high road.

The politicians who are standing there on the right talking about how reprehensible this act is and how horrible they feel should be looking in the mirror. They should be aksing themselves what part THEY played in this tragedy.
But they won't. They will never admit mistakes or admit they have done ANYTHING wrong.

I am so tired of politics in America. It has come to this.
Posted by SagaciousHillbilly at 2:36 PM 4 comments:

Stupid stuff and pricks in the news. . .

Loose Christian movement says End of Days in May

AP – In this Dec. 17, 2010 photo in Raleigh, N.C., Allison Warden poses with her car showing a message about …
By TOM BREEN, Associated Press – Mon Jan 3, 3:28 am ET
RALEIGH, N.C. – If there had been time, Marie Exley would have liked to start a family. Instead, the 32-year-old Army veteran has less than six months left, which she'll spend spreading a stark warning: Judgment Day is almost here.
Exley is part of a movement of Christians loosely organized by radio broadcasts and websites, independent of churches and convinced by their reading of the Bible that the end of the world will begin on May 21, 2011.

Why does anyone care what some tiny group of whacked-out fundamentalist xians think? These people are nut jobs. Why do fundie bozos even come up on the radar?
If I begin a cult that proclaims all humans will turn into toads by July 4th will I too make national news?
Hmmmm, maybe. Are ya with me fellow toadies?

Police say Josiah Martin was playing with two siblings and a neighbor child Saturday morning on the farm just outside New Holland when he wandered off. He was later found face-down in the 8-foot-deep pit and pronounced dead at the scene.

This is just plain sick. A horrible tragedy for some poor devastated farm family. . then the AP put it out on the news wires as a little curiosity piece. Kids die every day. Families are devastated by such deaths every day. Does it make national news? Apparently only if it has some kindergarten humor factor attached to it.

Somebody needs to find whoever decided to put this out and smack the shit out of them. Then, every editor across the country who picked it up and ran it needs the shit slapped out of them.
Yes folks, this is what we have evolved into as a society.

GOP agenda may mean more in 2012 than now

By LARRY MARGASAK, Associated Press – 2 hrs 7 mins ago
WASHINGTON – Even if the next two years end in congressional gridlock, Republicans hope to build a record that demonstrates to voters in 2012 that they can get it right.
The GOP is promising to use the new Congress that convenes Wednesday to cut spending, roll back President Barack Obama's health care overhaul and prevent unelected bureaucrats from expanding the government's role in society through regulations that tell people what they must or can't do. 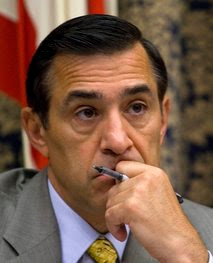 This story keeps coming up on various internet news services with various pictures of this same hair dyed asshat clown.
This dick wad is Darrell Issa, one of the richest men in congress. Here's a quote from this low life prick. He's talking about the 9-11 responders who have died and are dying from various related illnesses:
"I have to ask ... why the firefighters who went there and everybody in the city of New York needs to come to the federal government for the dollars versus this being primarily a state consideration."
This cold hearted right wing shit spewer is chairman of the House Committee on Oversight and Gov't Reform. Yea, he's going to reform the gov't for us. . . pretty much a sure thing the rich will get richer and the poor will get poorer.
So the GOP is going to fuck over the working and middle class like they've been doing for decades. The democrats will let them with only slightly audible whimpers as they take it hard up the ass. Anything new here?


Fla. man says he'll live in lions' den for 30 days
– Mon Jan 3, 5:39 am ET
SPRING HILL, Fla. – A Florida man says he's going to spend the next month living in a fenced enclosure with two African lions.
James Jablon of Spring Hill hopes the stunt will raise money for his wildlife center, Wildlife Rehabilitation of Hernando.
Jablon entered the lions' den Saturday. He says he's going to sleep on hay near the lions named Lea and Ed and eat when they eat.

Ahhh, so he's going to eat himself eh? (in my Uncle Henry voice (2 points for whoever gets that reference first)).

So another dumb fuck ass wipe who thinks he can hang out and commune with top-of-the-food-chain predators like they are just loving him. Yea, they're going to love him. Talk about losing touch with reality. . .
Say "hi" to Steve Irwin and that freak who decided to live with grizzly bears in Alaska a couple years ago. Bye motherfucker.

I like this one because it illustrates how we have let the terrorists win. They have disrupted our way of life and compromised our basic freedoms. That is exactly what they were trying to do and I'm sure they sit around laughing about their success.
Unfortunately, it's too complex for the ignorant proles to "get." They have to think beyond what the illustration literally says and come up with the implications of it all. The desperate mass of Amurkkkin proles are incapable of complex thought even on that level, so I have to go with the next one.

This is simple and to the point. It illustrates and states clearly the facts. It's gotta be that simple for Amurkkin proles to comprehend. And driving by at 60mph, it's gotta be kinda clear and simple for anyone.
Posted by SagaciousHillbilly at 6:03 AM No comments:

SagaciousHillbilly
Ohio Valley Watershed, West Virginia
I been to college and it aint hurt me none. I even got me a degree or two. I've been a scientist, a cook, a carpenter a farmer an environmental activist and had a couple other useless pursuits. My wife calls me a "jack of all trades and master of none." [Correction: She now says I am a "starter of much and finisher of nothing"] Yes, I have a wife, but she doesn't bother me much and I don't bother her much. We get along just fine. . . an she aint my sister or cousin! I don't complain much or tolerate whiners. My goal in life: Have fun. Hope you do the same.