I've got some really nice new pictures of Blair's work that I'm going to post when I get a chance, but here's a starter. . . his "artist's statement that he wrote a couple years ago. 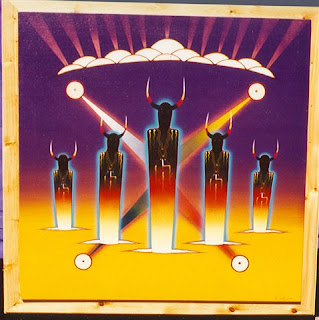 Blair Debassige is an artist from the M’Chigeeng First Nation on Manitoulin Island, Ontario. His lineage is Ojibwe Bear Clan. Blair is 44 years old. His work has been featured in magazines and in documentary films and television specials in North America and Europe, and has been sold to private collectors all over the world. Permanent collections include former Prime Minister, Jean Chretien, the Department of Indian Affairs and Arts Council of Canada, the Royal Ontario Museum, and the Vatican in Rome. Blair paints with acrylics and oil on canvas, and over the years has expanded to other mediums such as birch bark, rawhide, arch paper, shields, drums, and bone breast plates.

Blair’s art is rooted in the Ojibwe legends he grew up with, and in the language, itself, which is rich with symbolism. Spiritual integrity is intrinsic to Blair’s work. Painting is his way of paying homage to the spirit world, the traditions and voices of his people. In turn, his wish is that his painting will give those voices shape, color and form.

“I paint what is known as Woodland style, but with my own unique sense of color, content and form. My approach to painting is continually evolving as I grow into maturity both as an artist and a man. My paintings express not only my traditions and oral teachings, but sacred symbols and archetypes found in ancient cultures the world over. My painting is a form of lucid dreaming where content and form meld with unconscious forces. Perhaps these are forces of nature, or they are ancient symbols embedded in the human psyche, or simply fragments of dreams. Regardless of their source, they offer viewers a doorway into mythic space where all people are one, and all human striving is toward union with the Creator…Art lifts a veil between what we perceive as ‘real’, and what is truly real. True art is luminous.”

Bold, rich and uncompromising colors accent Blair’s vision and reputation as a painter. He often paints outside, overshadowed by cedar trees and accompanied by the pounding of waves on the shore. Despite countless invitations to tour his work overseas, Blair rarely leaves his home in M’Chigeeng. Instead, the artist declares that he puts himself into every one of his paintings – so that, no matter where the paintings end up – he can look out through them, into the world.


I can sum it up Blairs art in one 4 word sentence. . . Blair paints mythic space.
Posted by SagaciousHillbilly at 10:06 AM

Blair and his relatives are wonderful people. It's been 6 years since I've visited with them. This week I'll be taking a camping trip up to the mighty Manitoulin, with my two big Dawgs, and will surely pay a visit to the Debassige Clan and others. I'm excited! Those people, and that land, sit deep and dear to my Heart.
I'm a very lucky person to be honoured with their company and their grace.
I'll give a "hello" from you. :-)
Cindy H.