The Audacity of Dreams

I read the following this morning and began to ponder what the United States did 40 years ago.

A probe sent late Friday from the orbiting mother spacecraft took pictures and gathered other data India needs for a future moon landing as it plummeted to a crash-landing at the moon's south pole, said Indian Space Research Organization spokesman B.R. Guruprasad.. . .

It will be 40 yrs ago this Christmas that American astronauts first orbited the moon. It's hard to believe that in a time when we didn't have personal computers or even handheld electronic calculators that a group of men (a group of thousands) could have done what they did.
Nine times they went to the moon and back. Six times they landed, explored and returned. . . 40 years ago.

No doubt the greatest technological achievement in human history. I got to watch it unfold and happen. I wouldn't trade anything for having witnessed that unbelievable accomplishment. Those who performed those superhuman feats were and always will be my heroes. 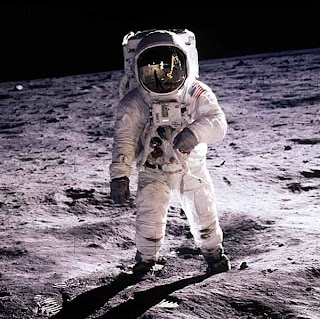 
So enjoy your crash landing of a square box on the Moon, India. . . not exactly a flag planting, but keep dreaming.
Posted by SagaciousHillbilly at 8:05 AM

That was an amazing moment in 1969. My mom in particular was thrilled and amazed to no end.

When I think of how we could have pouring our money into research since then instead of war, we probably could have discovered cures for all kinds of diseases, a gasless car, and have even more amazing technology. I hope we go back to those great ideas and dreams in the near future.

Absolutely true Kit. Much of the technology we have today is a direct result of the 60s space race.
If we were to focus on almost ANY peaceful technological endeavor the way we did going onto space, we'd be way ahead.

The Indians like other countries want a piece of the moon they can claim. The Russians and China will have a flight going to Mars in 2009and we will have another rover shortly heading there. OUr new space truck will replace the shuttle and get us back on track to the moon and Mars.