What will those fucked-up republican goons think of next?!
Sometimes I think we've come so far in Amurkkka, but then I see things like this and I'm left speechless. . . and Philly aint Mississippi or Alabama.

With just weeks to go before the presidential election, voter intimidation has reared its ugly head.

An anonymous flier circulating in African-American neighborhoods in North and West Philadelphia states that voters who are facing outstanding arrest warrants or who have unpaid traffic tickets may be arrested at the polls on Election Day.

Deputy Mayor for Public Safety Everett Gillison, who learned of the flier last week, said that the message is completely false.

"The only thing that police officers are going to do that we'll be encouraging that day is that they'll be exercising their own individual right to vote," Gillison said.

He plans to put up statements on the city and police Web sites to let citizens know that the handouts are false. He said that he also will record a public-service announcement for broadcast.

Gillison referred the matter to the U.S. Attorney's Office and the district attorney.

"We are not going to stand for any intimidation of voters," Gillison said. "Not in this city." 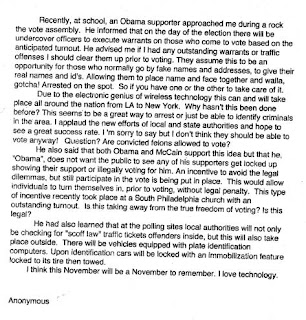 Thanks to Field Negro at fieldnegro.blogspot.com for the tip on this one.
Posted by SagaciousHillbilly at 5:28 AM

This shit pisses me off so much. This was done in the past two pres. elections as well. But it doesn't stop there. There will be one or two machines in heavily democratic or black districts, while heavily republican districts will have 10. Some Secretary of States like in Colorado are throwing out new registrations (i.e. black, youth) over minute technicalities that don't matter. And lets not forget Florida 2000, where black voter rolls were matched with a list of black felons. Because a name was similar, they were thrown out.... never mind social security numbers were never matched. It's sickening.

That's why Obama has to maintain at least a 6-7 point lead.

I have been unable to sleep, because of the lies and smears that McAsshole is putting out now. I'm glad that Obama is finally releasing his own ad showing McC relationship to the Keating 5. There is so much more dirt he could throw, if he would only call me! How about Todd Palin and his connection to the secessionist organization in Alaska? McCain's pal (60's radical David Ifshin? The next 29 days may be a rollercoaster, but I'm in for the full ride.

Look for the debate to get ugly tomorrow night. I just wish there was some way Obama could get McCain to go nuts in fornt of 120 million Americans. These letters and such are just plain nasty and shows the Republicans are out to scare the poor and minorities.