Puffy McBush really is an idiot. He's not too bright and he's not very well educated. Back when I was a kid growing up, I had the unique opportunity to visit a remarkable planetarium. It was one of the best in the world. Everyone sat in a circular auditorium around this remarkable space alien looking projector that projected all sorts of images of the night sky on the ceiling.

It was like magic. You could zoom through the solar system and see things that were unimaginable. Back then, astronomers knew about 25% or less maybe of what they know now. There hadn't been any Hubble space telescope or Voyager explorers and men had never been beyond low Earth orbit. . . actually, the first time I went men had never even been in space. Today we know so much more and the "overhead projector" used in modern planetariums are incredible. In fact, here's the description from the one in the Hayden Planetarium in NYC. 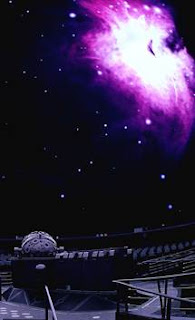 The Digital Dome System takes the astronomical information of the Digital Galaxy and stores it on a Silicon Graphics® Onyx2™ InfiniteReality2™ visual workstation, one of the largest supercomputers ever dedicated to creating visual simulations and equivalent in power to those used by NASA or the largest military research laboratories. When the Digital Galaxy software is booted, the Hayden Planetarium's supercomputer generates a three dimensional map of the galaxy that is so realistic that the dome itself seems to disappear.

Someday, I want to go there and see what modern planetariums are like.

So the other night when Puffy McBush referred to the projector at the Chicago Museum of Science as an "overhead projector" I couldn't believe what a fool he was. I was waiting for O Man to assail him with the facts of what a planetarium projector was all about, but alas, he let it pass for good reason since there is just so much time in such a debate.
For me, it only showed what an archaic old man Puffy really is. He doesn't know how to use the internet, he thinks a planetarium uses an "overhead projector" and he's never used a blackberry . . . oh yea, neither have I. . . but I would if I were a US Senator.

And let's talk about health issues. This guy has had cancer more than once. Remember back in '92 one of the best men to run for president in my opinion, Paul Tsongas was a cancer survivor. He died in '94 and he was relatively young. Let's face it, Puffy doesn't look good. He looked hobbled the other night. He looked like he could hardly muster the will to go one at times. He looked very agitated with all the pacing around and nervous movement.
Medical experts who crunch such statistics have given Puffy a 25% (1 in 4)chance of dying in office. That emans there is a 25% chance that Sarah Palin would become president. Geez, if that aint enough to scare the fuck outta ya!

So do we really need an unhealthy, angry and generally ignorant old man for president in this time when we need energetic leadership that can tackle the tough problems we face. We need a man who can spend 16 hour days hashing out issues and proposals and educating himself on the conditions he is likely to face. We need someone who can communicate in this modern age both with the people he relies on and the American public.

Obama leads in WV by 8 points?!?! WTF? Will I have to do a retraction of all the nasty things I've said about WV being a backwater of ignorance and backwoods inbred morons? Will I have to go around to other blogger sites and make apologies?
Not so fast you bunch of hillbilly backwoods proles, it aint happened yet and all we're looking at is one poll by an organization called the "American Research Group" that I've never heard of.
But if, and that's a BIG IF, the electorate of WV decide to put aside their rampant racist attitudes and vote to give their electoral votes to Barack Obama, I will make whatever apologies within reason are requested of me.

Opening tomorrow in theaters across the nation, "The Express" is based on the life of Ernie Davis, the first black athlete to win college football's Heisman Trophy.

Syracuse players who were there in 1960 - the only time Davis played in Morgantown - have said nothing like that happened.

I agree.
And while you're at it MonkeyBoy (yes folks, WV has their own MoronMonkeyBoy for gov), make Hollywood apologize for that little piece of fiction that glorified WV's native son with all sorts of false BS while the real heroes of the time who really had all The Right Stuff, were made out to be a bunch of whining incompetent frat boys. Talk about a piece of fiction!
Oh, and maybe we should take a close look at films like "We Are Marshall" and "October Sky" and see were the fiction lies within them. Hmmm, I wonder how many films have been made about people from . . . oh, North Dakota or Nebraska?

Ed. note: Historically, WV has actually been a very progressive state when it comes to equal rights in many areas such as the courts, education, labor and legislation.
Posted by SagaciousHillbilly at 4:11 PM

If it were a massive interplanetary weapon, believe me, the funding would be there in a heartbeat.

I hear all over the south and in WV people are now using Obama bumper stickers. Whe it comes to jobs I believe the WV people will pick the best person for President, Obama.

Daisey, of course. It would be money for the corpo-fascists in that case.
Rainey, Don't count on it. The south and hell, the rest of the country is notorious for voting against their best interests.

Southern WV is surprisingly leaning to Obama. The sparsely populated parts in northern WV are heavily weighted to McCain. This state is not homogeneous.

Pollo, Labor still has some influence in some places.

McC couldn't argue himself out of a paper bag, much less hold his own in a debate. Obama is the cool cucumber here. McCrackhead didn't benefit from that "overhead projector" b ut may benefit when he gets his hair transplants...dimwit! I am surprised with WV and the percentages. I am right across the river from Wheeling and hate to say it - staunch Repubs seem to be in the majority. With Palin coming here Sunday - you would think they all just got a shiny new bike!

Todays American Research poll shows Obama 50% McCain 42%!! Last polls (Rasmussen and another from 9/24) showed McCain w/ a 6 pt advantage. I know its only one poll and is probobly an outlier, but there's clearly movement in Obama's direction. I hope he doesnt reach his ceiling because he needs a good 6-10 pt advantage on election day to win this thing.

hillbilly, i don't know exactly what's driving Obama here in WV. Labor has a part in it but we're not all ignorant rednecks. We used to be one of the deepest blue states...the evangelicals and NRA nuts have swung things the Republican way. You drive around here and the working and middle class neighborhoods all have Obama signs, while the rich folks in the hills have McCain signs. I think people are getting it.

Heard that WV, Wyoming, and ND are basically the only states that are doing well economically. No shit!! WV doing well while everyone else is knee deep in shit. Lets turn everything else on its head and elect the first African American president, shall we :)

WV doing well is relative I suppose. If you've got your ass sunk in the stock market, your ass is no doing so well right now. I've watched my retirement accounts go from able to support me, to going back to work.
No, we're not ALL ignorant rednecks. . . and yea, it's almost absurd to see all the McMansions in So. Hills and along the river in Winfield with McCain/Palin signs. What a bunch of morons.

I agree with themom, McTurd can't argue his way out of a paper bag. Well said.