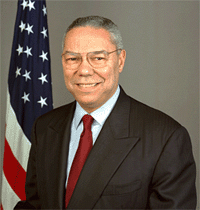 General Powell, This was your opportunity. After years of pandering to the right, this was your opportunity to show yourself to be the true American patriot that we always suspected you were.
Yea, you lied, lied like a desperate republican lackey before the United Nations about "yellow cake" uranium, which was probably your lowest hour, but even then you tossed in the towel and resigned. No, some of us will never forget that you lied hundreds of times in the lead-up to the Iraq fiasco, but we've always had some glimmer of hope when we watched you General Powell. Hope that you would be the guy who would step up to the plate and do the right thing.
But oh those military protocols and codes of honor. They have kept you at bay from opening up and spilling the beans on so many issues and entities. I guess I can forgive you on some level for being loyal to the commander and chief, but you were so complicit.

Today you had the opportunity to stand up and do what was right and endorse the best candidate for president of the United States we've seen in decades.

Thank you General Powell. You finally came through. You've done what was right and added your support to this noble cause. You are a decent man and one of the few to emerge in the past 20 years from the right.
Posted by SagaciousHillbilly at 12:09 PM

Well said. I'm waiting to see if McC/P dare to trash Powell as un-patriotic or anti-American as some have done.

Sorry, but I don't think 550 metric tons of yellowcake uranium is anything to dismiss. The point is that Saddam didn't build a nuke because Israel and then the U.S. and her allies saw to that. The uranium ore is now safely in Canada. No thanks to ultra-Liberals, Communists, whatever they call themselves.

Rather nice to be able to remain safe while at the same time using those same issues to attack the man who made us safer.

Oh, and the 50-55,000 terrorists who are now enjoying Paradise including top leaders has at least for now given us a respite. They don't seem to be for talking much, but that's just my take on 'em.

As for the General, I believe him to be a good man and his choice is his choice.

skareb, 550 metric tons where? The same place Saddam hid the "weapons of mass destruction?"
More like the same place where the MoronMonkeyBoy administration hid the truth.

Ahh, Gen. Norman Schwartzkopf. . . the man who laughed every time he showed a guided missle slamming into an Iraqi bunker or building.
I'd piss on his grave for delivering that image and message to so many children in Amurkkka in the early 90s.